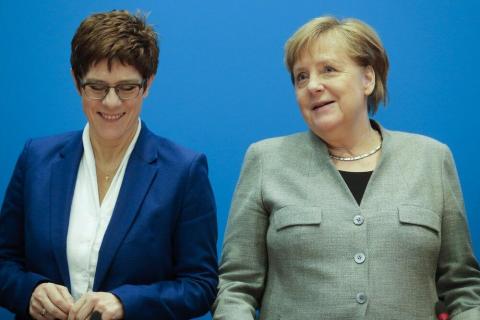 Chancellor Angela Merkel's heir apparent shook up German politics on Feb. 10 by declaring she would step down as the governing party's leader and not run for chancellor, fueling uncertainty in the country seen as Europe's anchor of stability amid Brexit and pressure from the far right.

"I took note of this decision with the utmost respect, but I also say that I regret it," Merkel told reporters, thanking Kramp-Karrenbauer for her work and for agreeing to stay on until a new party leader is chosen. Kramp-Karrenbauer plans to remain in her role as Germany's defense minister.

The announcement followed days of in-fighting within the party over the election of a governor in the state of Thuringia. Christian Democratic Union legislators there voted with the far-right Alternative for Germany party (AfD) last week to oust a left-wing incumbent.

The CDU representatives not only defied Kramp-Karrenbauer's advance appeals and undermined her leadership, but broke what is widely regarded as a taboo in post-war German politics around cooperating with extremist parties.

"The AfD stands against everything we as the CDU represent," Kramp-Karrenbauer told reporters on Feb. 10  in Berlin.

Manfred Weber, a German member of the European Union parliament who leads a center-right bloc in the EU legislature, told daily newspaper Welt that the situation in Thuringia reflected a Europe that ...