Greece aims to send 200 migrants a week back to Turkey 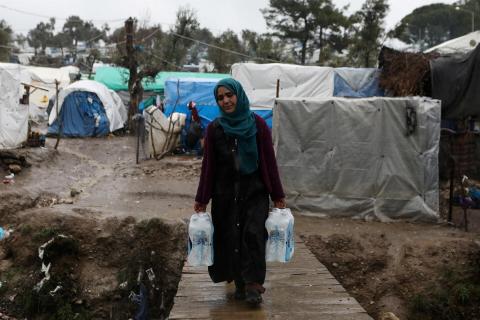 Greece has announced that it will begin building closed camps for migrants on its Aegean islands in March and plans to send 200 asylum seekers back to Turkey each week.

The new camps, expected to become operational by mid-2020, will be designed to accommodate 20,000 asylum seekers for a maximum of three months at a time, Greek Migration Minister Notis Mitarachi told radio station Skai on Feb. 10.

The islands of Lesbos, Chios, Samos, Kos and Leros will take the lion's share of the migrants, he said.

Mitarachi, appointed migration minister in mid-January, said Turkey has fully cooperated with the return of migrants, adding that the government aimed to send 200 rejected asylum-seekers back to Turkey each week.

The camps to be shut down currently house some 42,000 people in dire conditions that have been repeatedly castigated by rights groups and the Council of Europe.

They have a nominal capacity of just 6,200, according to the U.N. refugee agency UNHCR.

The migrants are currently allowed to come and go freely on the Greek islands.

The closed camps will allow asylum seekers to go out during the day, but will be locked in at night, according to government spokesman Stelios Petsas.

The decision to create closed camps was prompted by a series of violent incidents and growing exasperation among islanders in recent months.

The conservative government of Prime Minister Kyriakos Mitsotakis, in power since mid-2019, has said it wished to "accelerate" a review of procedures for granting asylum.

It has already passed a law stiffening asylum requirements for migrants and has pledged to deploy additional border patrols.

It announced in October that it planned to shut down the largest of the camps on the...