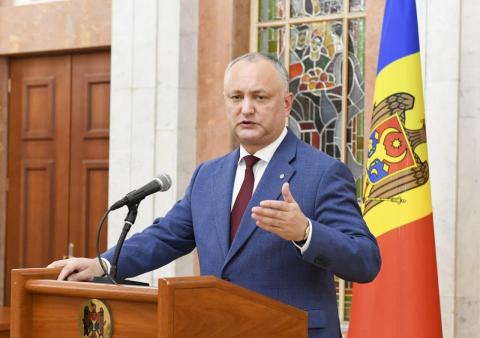 Economic and political analysts in Moldova have criticised an initiative by President Igor Dodon and the government led by Ion Chicu to shift 50 per cent of the National Bank of Moldova's annual profits into the state budget, describing it as a populist move that will not benefit ordinary people in the country.

Dodon told a government meeting on Monday evening that the move was intended to soften the financial burden on the public in paying back some $50 million a year for the next 21 years to remedy the so-called 'grand theft' of $1 billion from the Moldovan banking system in 2014.

The $1 billion was guaranteed at the time by the National Bank.

Former Finance Minister Natalia Gavrilita claimed that Dodon's initiative was linked to boosting the state budget ahead of presidential elections in November this year.

"Igor Dodon's manoeuvre with the so-called easing of the financial burden on citizens is actually removing money from the National Bank of Moldova's reserves to finance the government's huge expenses in an election year," Gavrilita wrote on Facebook.

The National Bank of Moldova said that the scheme would be possible if the Law on the National Bank is amended to allow the phased and partial distribution of its profits to the state budget up to a limit of 10 per cent of the bank's capital.

But political analyst Victor Ciobanu said that the president's initiative was "financial engineering" aimed at bolstering the state budget.