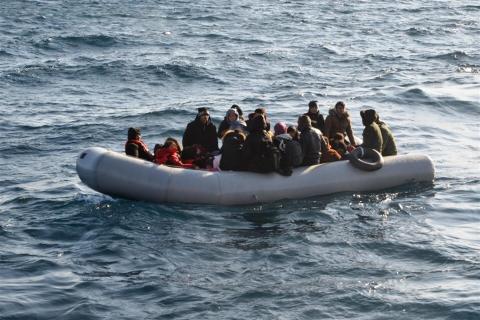 Patrolling in the Aegean, Turkish Coast Guard teams noticed a group of people trying to get to the Greek island of Lesbos, and intercepted their boat and held the migrants, said the sources, who asked not to be named due to restrictions on speaking to the media.

Among the migrants were nationals of Afghanistan, Somalia, Gambia, Togo, and Mali. They were later transferred to provincial migration offices for legal processing.

In Edirne,  the provincial gendarmerie forces and police officers conducted operations against those seeking to enter Europe illegally.

Among the migrants held were nationals of Palestine, Eritrea, Bangladesh, Morocco, Syria, Iran, Pakistan and Afghanistan. They were later transferred to provincial migration offices.

Also, gendarmes found a body and rescued a person who showed symptoms of hypothermia from the Martisa River which flows through Greece to Edirne.

Rescuers said they were possibly trying to swim to Europe through the river.

Turkey's Edirne province, which borders Greece and Bulgaria, is a key transit point for irregular migrants aiming to start new lives in Europe, especially those fleeing war and persecution.

But strict monitoring by security forces prevents them to cross to the continent.

In 2019, Turkish authorities held a record of 454,662 irregular migrants across the country, with about 60,000 caught while traversing the Mediterranean Sea.