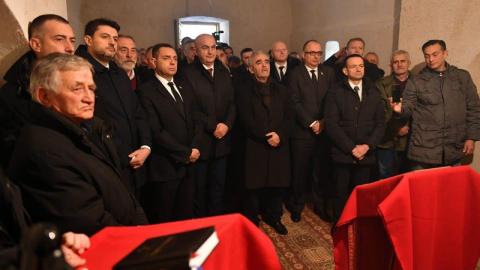 Serbia's Defence Minister Aleksandar Vulin attended a commemoration in Montenegro on Tuesday to mark the 20th anniversary of the murder of Yugoslav Defence Minister Pavle Bulatovic in 2000.

Vulin led a delegation from the Defence Ministry and the Serbian Army to liturgy at the Kostrikovac Monastery in Rovci near Kolasin in northern Montenegro, and laid a wreath at a monument to Bulatovic.

He also directed some barbed comments at the Podgorica government amid a dispute between the two countries over Montenegro's new Freedom of Religion Law, which has sparked ongoing protests in the country.

Critics of the law claim that its aim is to rob the Serbian Orthodox Church of its properties in Montenegro.

Montenegrin media reported that members of the Serbian delegation were not allowed to wear military uniforms on Tuesday, which sparked some sharp retorts from Vulin.

"We have come and will always come to be with our people. I am sorry that the Serbian uniform is so terrible in Montenegro that it should not be here. I expected that from Croatia, but I did not expect that to be the case in Montenegro," said Vulin, who has been highly vocal in his criticisms of the Montenegrin government over the church issue.

Montenegro's Foreign Minister Srdjan Darmanovic told a press conference on Tuesday that military uniforms could only be worn when visiting monuments of national importance.

"Therefore the use of military uniforms is not an option under consideration [for the...