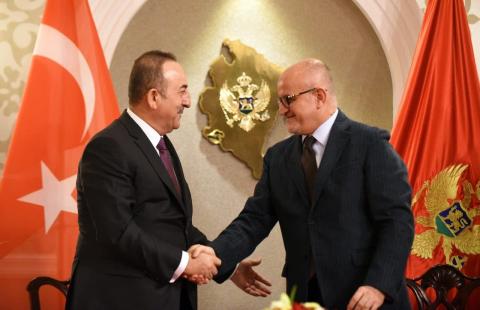 At a joint press conference, Cavusoglu and his Montenegrin counterpart Srdjan Darmanovic announced that their countries pledged to boost trade volumes from the current $140 million to $250 million in the near future.

They also announced the opening of a Montenegrin consulate in Istanbul and that Turkey has appointed an honorary consul in the northern Montenegrin city of Bijelo Polje, where a significant number of Muslim Bosniaks live.

"Turkey and Montenegro have excellent political relations and we want to improve our relations in every field," Cavusoglu told a press conference in Podgorica with his Montenegrin counterpart Srdjan Darmanovic.

Cavusoglu added that Turkish companies are increasingly investing in Montenegro.

"Investments will continue. We are happy that major Turkish companies invest in Montenegro; we support them," Cavusoglu said.

There are now more than 2,000 registered Turkish businesses in Montenegro, outnumbering both Russian and Serbian firms, according to tax administration data.

Montenegrin Foreign Minister Darmanovic also said that Turkey-Montenegro relations are improving in every field and thanked Turkey for agreeing to represent Montenegro in countries where Podgorica has no diplomatic missions.

Turkey to represent Montenegro in Africa and Asia

The Turkish and Montenegrin governments previously agreed that Turkish embassies will represent Montenegro in 23 countries, mostly in Africa and Asia.

"We are happy to represent Montenegro in...