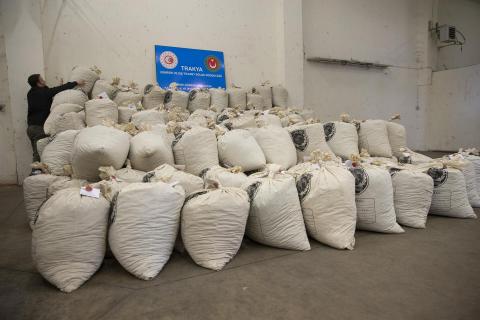 Turkish customs officials seized a record two tons of marijuana at the border crossing with Bulgaria, the country's trade minister said on Feb. 11.

"In an operation carried out at the Kapıkule [customs gate] by customs officials of our ministry, 2.07 tons marijuana were seized, and a new record has been broken," Ruhsar Pekcan said in a tweet.

The drug was seized from a lorry which was stopped at the border crossing.

A few months back, customs officials seized 1.7 tons of drugs at the Istanbul Airport, the trade minister said.

The lorry was reportedly carrying compost from Italy to Georgia, said a statement by the Trade Ministry.

When the Kapıkule Border Gate officials became suspicious, they carried out an x-ray examination, in which they noticed unidentified items inside the lorry. With the help of a sniffer dog, the officials busted 213 marijuana packages.