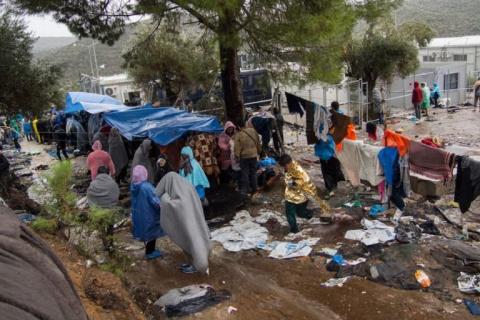 As ruling New Democracy and main opposition SYRIZA cross swords over the government's plans to requisition fields to create closed refugee and migrant reception centres, the UNHCR has called for the evacuation of refugee and migrant families and ailing people from the Moria camp on the island of Lesvos.

The international press has persistently reported on the horrid living conditions in the Moria camp, which has been fraught with violence and squalor.

However,  there is also an immediate threat of a public health crisis as volunteer doctor Hana Pospisilova told The Guardian.

"I am an experienced doctor, I have seen many patients in my life, but what I saw there had me crying. I saw many children I was worried would die because they were suffering malnutrition. I met a baby who smelled bad; his mother had not washed him for weeks because there was only cold water and she was worried he would die," Popisilova said.

"There are children, between 12 and 15, living in the olive grove and they are barefoot. A lot of them have scabies and we can't treat it because they have to wash. But they say to wash means waiting three hours and it's risky: people have knives, and you can only have two minutes in the shower after you wait, I tell them they need to discard their clothes and they say 'I have only these clothes.' They have had them on for seven months. I saw everyday 20 people and all 20 had a horror story," she told The Guardian.

"People come and go to the medical facilities, they take antibiotics, but they are still coughing, they still have a temperature. If you read about Spanish flu it was exactly like this that it began to spread, in overcrowded facilities where people...