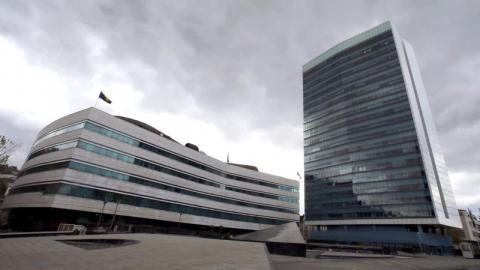 Bosniak leaders on Wednesday accused Bosnian Serb officials - who have stopped work on deciding any state-level matters, pending adoption of a new law on the Constitutional Court - of breaking the law.

Since almost no decision in Bosnia can be made without the consent of all of its three constituent peoples, Bosniaks, Serbs and Croats, the Bosnian Serb strike effectively blocks much of the work of government.

This decision to stop work follows a meeting on Wednesday of all the main Bosnian Serb parties, including their representatives in state institutions, with the Zeljka Cvijanovic, the RS President, and the Serbian member of the Bosnian state presidency, Milorad Dodik, in Banja Luka, the RS administrative centre.

That followed a February 7 ruling of the Constitutional Court of Bosnia and Herzegovina, which declared the RS Law on Agricultural Land - which stipulated that public agricultural land by law should become the property of the RS - unconstitutional.

The Court ruled that the state of Bosnia and Herzegovina, not the RS, should be the owner of such land. It acted upon the motion filed by seven Bosniak delegates to the RS Council of Peoples, the chamber that represents the interests of the three constituent peoples.

Adding to the sensitivity of the matter, the judging panel of the court is made up of three foreign judges as well as two Bosniak, two Croat and two Serbian judges.

Bosnian Serbs have long objected to the court - and especially to its foreign judges. "For years we have continuously got decisions of the Bosnian Constitutional Court that are damaging to the RS and very often go beyond the jurisdiction of the … court," RS President Cvijanovic said after the meeting, adding that the Constitutional Court had gone...