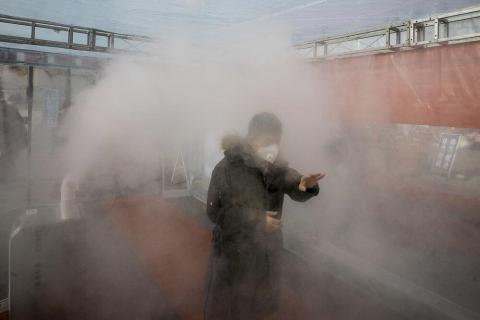 China on Feb. 12 reported another drop in the number of new cases of a viral infection and 97 more deaths, pushing the total dead past 1,100 as postal services worldwide said delivery was being affected by the cancellation of many flights to China.

The National Health Commission said 2,015 new cases had been reported over the last 24 hours, declining for a second day. The total number of cases in mainland China reached 44,653, although many experts say a large number of others infected have gone uncounted.

The additional deaths raised the mainland toll to 1,113. Two people have died elsewhere, one in Hong Kong and one in the Philippines.

In the port city of Tianjin, just southeast of Beijing, a cluster of cases has been traced to a department store in Baodi district. One-third of Tianjin's 104 confirmed cases are in Baodi, the Xinhua state news agency reported.

A salesperson working in the store's small home appliance section became the first individual in the cluster to be diagnosed on Jan. 31, Xinhua said. The store was already closed at that point, then disinfected on Feb. 1. Nevertheless, several more diagnoses soon followed.

The next to have their infections confirmed were also salespeople at the store. They had not visited Wuhan recently and, with the exception of one married couple, the patients worked in different sections of the store and did not know one another, according to Xinhua.

Japan's Health Ministry said that 39 new cases have been confirmed on a cruise ship quarantined at Yokohama, bringing the total to 174 on the Diamond Princess.

The U.S. Postal Service said that it was "experiencing significant difficulties" in dispatching letters, parcels and express mail to China, including Hong Kong and...