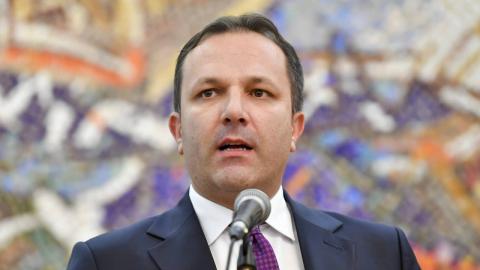 North Macedonia's Prime Minister, Oliver Spasovski, on Wednesday moved to axe Labour Minister Rashela Mizrahi from the caretaker government for her refusal to use the country's new official name in a press conference.

"Having in mind that minister Mizrahi is consciously and deliberately breaching the constitution, and thus endangering the Euro-Atlantic future of the country, the PM has submitted a proposal for the dismissal of the technical minister… to parliament," it added.

Mizrahi, who comes from main right-wing opposition VMRO DPMNE party, provoked a storm last weekend within the government - and with Greece - by standing in front of a plaque bearing the country's old name, Republic of Macedonia, at a press conference.

On Tuesday, she added more heat to the situation when she said that she has no intention of changing the plaque bearing the old name and replacing it with a plaque with the new name, Republic of North Macedonia. "I am prepared to pay a fine if it comes to that," Mizrahi said.

The country changed its name, adding a geographical qualifier, as a direct result of the historic June 2018 agreement with Greece, which in return ceased to object to its neighbour joining NATO and the European Union. North Macedonia is currently waiting for the EU to set a start date for accession talks.

The ruckus happened just ahead of April general elections in which the main ruling Social Democrats, SDSM, who engineered the deal with Greece, will compete with the VMRO DPMNE party, which opposed the deal.

But the motion for dismissal could complicate matters within the caretaker government, as Mizrahi is one...