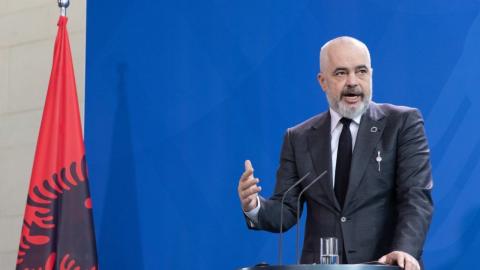 The centre-left government of Albania under Edi Rama has caused a new storm by saying it wants to give the police the power to conduct surveillance to stop crimes without obtaining court permission. The change forms part of a proposal sent by the government to the parliament for approval.

According to the explanatory note, the change is needed to allow the police "to use special measures [such as phone interception or surveillance] in an efficient way".

The proposal also foresees the creation of an administrative body or "committee", chaired by the Minister of Interior, to which the General Prosecutor and chairman of the Special Anti Corruption Prosecution Service should report periodically.

The opposition called the initiative unacceptable and an attack on human rights. "Edi Rama is substituting the rule of law with a police state regime in a flagrant violation of human rights. For us it is an initiative that undermines the European road of Albania; it is non-constitutional and unacceptable," Gazmend Bardhi, of the centre-right opposition Democratic Party, a former Justice Minister, said.

This is a second time in a few years that the ruling Socialists have proposed the measure. In 2015, the opposition sent the matter before the Constitutional Court, which ruled it as incompatible with the constitution.

According to the court, the prosecution is the only institution allowed by the constitution to investigate crimes, and giving such power to another...