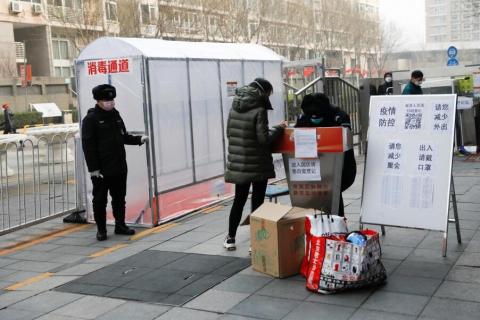 The Chinese province at the epicenter of the coronavirus outbreak reported a record rise in the death toll on Feb. 13 under a new diagnostic method, and Beijing sacked two top provincial officials after criticism of their handling of the crisis.

Health officials in Hubei province said 242 people had died from the flu-like virus on Feb. 12, the fastest rise in the daily count since the pathogen was identified in December, and taking the total number of deaths to more than 1,350. A total of 1,310 deaths have been reported from Hubei.

Asian stock markets wobbled and the safe-havens of the Japanese yen, gold and bonds rose after the new Hubei numbers dashed hopes the epidemic was stabilizing and the Chinese economy could bounce back quickly.

The spike in the death toll came a day after markets were cheered when China reported its lowest number of new cases in two weeks, bolstering a forecast by the country's senior medical adviser that the epidemic could end by April.

The reports did not give a reason for the dismissals but the two are the most high-profile Chinese officials to be removed from duty following the coronavirus outbreak that began in Wuhan late last year.

"Thank you Communist Party. It should have been done earlier," Wuhan resident Wang You told Reuters.

Dozens of low-level health officials across the country have also lost their jobs for failing to contain the epidemic, which is believed to have emerged from a market in Wuhan where wildlife was traded illegally.