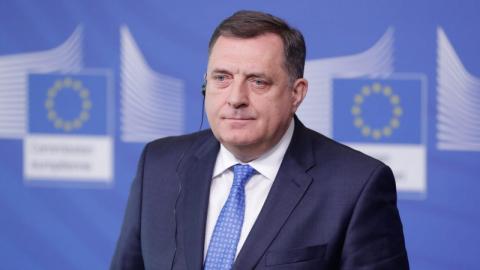 After Bosnian Serb representatives walked out of state-level institutions in the country on Wednesday, Bosnian Serb leader Milorad Dodik warned on Thursday that they were now on a path towards "leaving Bosnia and Herzegovina".

"We will do this, and will not be stopped by the US or anyone else, because we believe that the [1995] Dayton Agreement [ending the 1992-5 war in Bosnia] has been broken, primarily by the intervention of an international factor," Dodik, the Serbian member of the Bosnian presidency, said.

He added that unless an agreement was reached soon, there would be no Bosnian state by the spring. "I want everyone in the RS to know - we hit a wall.

"We now have to decide if we will accept that these false flaps, from the US and Western embassies …[that] essentially undermine our rights, or the RS does what it has to do," Dodik continued.

The decision to pull out of state institutions followed a ruling by the Constitutional Court of Bosnia and Herzegovina. This declared a law passed by the mainly Serb entity in Bosnia, Republika Srpska, on agricultural land formerly owned by the Yugoslav state, unconstitutional.

The Court ruled that the state of Bosnia, not the RS, was the owner of such land. It acted upon the motion filed by seven Bosniak delegates to the RS Council of Peoples, the chamber that represents the interests of the three constituent peoples of Bosnia, Bosniaks, Serbs and Croats.

Adding to the sensitivity of the matter, the judging panel of the court is made up of three foreign judges as well as two Bosniak, two Croat and two Serbian judges. Bosnian Serbs have long objected to the court - and especially to its foreign judges. They want the adoption of a new law on the state Constitutional Court, excluding...