France, US, Pile Pressure on Kosovo to Scrap Tariffs 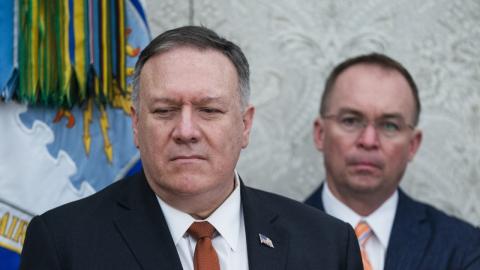 Within less than 24 hours, Kosovo's Prime Minister, Albin Kurti, has received two high-level letters calling on him to abolish the tariffs imposed on goods from Serbia and Bosnia and Herzegovina, in order to help restart the stalled dialogue with Serbia.

On Thursday, Kurti's office published a letter sent by US Secretary of State Mike Pompeo, saying that after 15 months of stalemate, "now is the time to realize comprehensive normalization with Serbia, centered on mutual recognition, which is essential to Kosovo's full international recognition.

"Ending tariffs on goods from Serbia and Bosnia Herzegovina will be important in bringing parties [Pristina and Belgrade] back to negotiating table," Pompeo told Kurti.

"We hope and expect that you will make this a priority and take advantage of this momentum built by the letters of intent to establish air and rail links between Pristina and Belgrade," he added.

Pompeo was referencing plans to restore air links between Kosovo and Serbia, which have not functioned for decades.

It comes a day after the French ambassador to Kosovo, Marie Christine Butel, brought Kurti a letter signed by President Emmanuel Macron, congratulating him on taking over the job of Prime Minister after months of negotiations between his Vetevendosje party and the Democratic league of Kosovo, LDK.

In his letter, Macron called the prospect of normalized relations between Kosovo and Serbia "a great challenge for the future of Kosovo and a challenge to the security of Europe".

"The first step should be the restart of the [EU-led] dialogue, which I am ready to facilitate by organizing in Paris, soon, a summit with leaders of Kosovo and Serbia, together with [German] Chancellor [Angela] Merkel and the EU High...