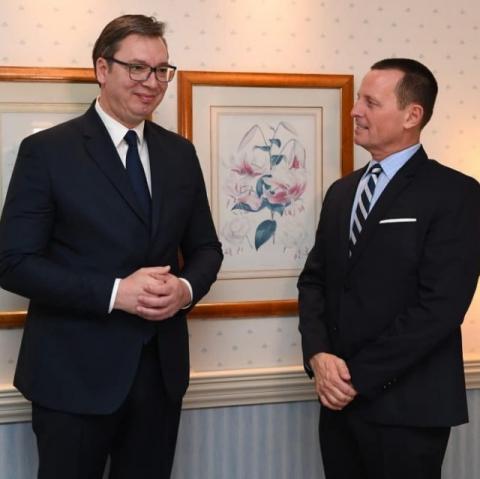 Following a meeting this afternoon, immediately upon his arrival in Munich, with Special Envoy of the U.S. President for the Belgrade-Pristina Dialogue, Richard Grenell, Vucic answered the questions on a press conference.
"Washington wants the Kosovo authorities to revoke the 100 percent tariffs on goods from Serbia, and they insist on its immediate and urgent suspension, so that Belgrade and Pristina can resume dialogue", Vucic said.
He said that people in Serbia know, and he will not repeat, that "there are no easy talks for us", but he is also very pleased because Grenell has taken a firm approach in abolishing fees.
When it comes to negotiations with Pristina, he said it all depends on the abolition of fees.
"We sat with them in various venues, but formal negotiations depend on the abolition of taxes", Vucic said, adding that it had nothing to do with the election campaign.
"My idea is that when you go to Bosnia-Herzegovina, Montenegro, North Macedonia and Albania, you have no borders, but that requires political stability," Vucic says, adding that he is concerned about the situation in Bosnia and Herzegovina where the crisis broke out because of the Constitutional decision court that land in Republika Srpska belongs to Bosnia and Herzegovina.
Vucic told reporters that in his conversation with Grenell, he also expressed his belief that we would "all have the strength together to preserve peace and stability".
"I spoke with Milorad Dodik on the phone, he conveyed his position to me and I saw that everything that had happened hit him hard. We agreed to discuss this in more detail on Saturday", Vucic said in Munich, where he will participate in the Security Conference tomorrow.
He said that in his conversation with...