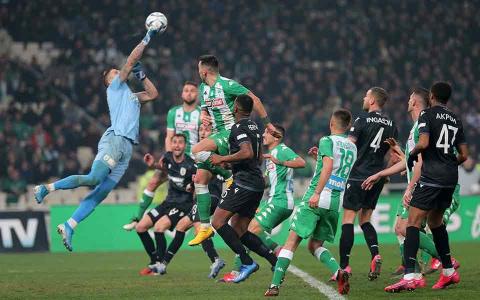 PAOK, Olympiakos and Aris have clinched a spot in the Greek Cup semifinals this week, while one of AEK and Panetolikos will join them next week.

Having suffered a damaging 2-0 defeat for the Super League at Panathinaikos, PAOK got its revenge in the Cup quarterfinals winning both at home and away. It topped up its 2-0 home win last week with a comfortable 1-0 victory in Athens on Wednesday thanks to Karol Swiderski's strike from the 11th minute.

Lamia threatened Olympiakos with an upset for a second year in a row. After a goalless first leg at Lamia the visitors took a first-half lead in Piraeus on Wednesday thanks to Daniel Adejo.

The Reds needed goals in the second half to qualify, and got two from defender Pape Cisse and one from striker Ahmed Hassan, with Lamia cutting its arrears through a Leonardo Villalba penalty kick on the 90th minute, for a 3-2 final...