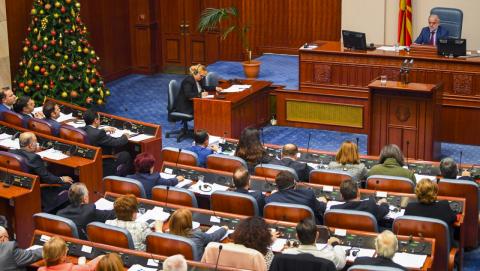 Efforts to pass a long-awaited law in North Macedonia on the prosecution before the Sunday deadline expires continued on Friday, after a tense day in parliament saw the main ruling Social Democrats frustrated by the conduct of their junior partners in the Democratic Union for Integration, DUI.

As parliament readied to resume session, it was unclear whether the law would muster the required two-thirds majority needed for it to pass before the parliament goes into recess on Sunday, ahead of the April 12 general elections.

On Thursday, tension within the ruling alliance escalated after the DUI submitted another last-minute precondition for backing the law, and demanded the re-working of the borders of a mainly ethnic-Albanian electoral district to maximize the number of potential Albanian MPs from the area.

The Social Democrats accused the DUI of making excuses to block the passage of the law and threatened to cancel the early general elections.

"If the stalling in parliament continues and if voting for important laws is blocked … there is a real possibility that we will form a new parliamentary majority and then a new stable government will organise regular elections," the Social Democrats' secretary general Ljupco Nikolovski told 21 TV. Regular elections are not due till the autumn.

The Social Democrats are strongly pushing for adoption of the Prosecution Law, which both the EU and the US also support, hoping it will persuade Brussels to finally set a date for the start of EU accession talks. The EU failed to set an expected date late last autumn, which prompted the Social Democrats to call the early elections.

But they need the support of at least 80 of the 120 MPs in parliament, which is they also need the backing of the DUI...