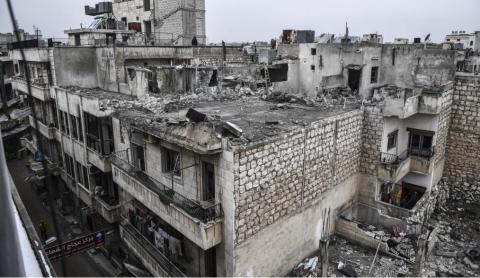 As the Syrian war approaches its ninth year, half of the 22 million population has been displaced and more than six million of them had to leave the country.

In the south of the Idlib province, hundreds of thousands of people were displaced from their homes due to bombings and attacks carried out by the regime.

Due to the attacks, fear has replaced peace in Idlib city center, 40 kilometers from the Cilvegözü border gate in Turkey's Hatay province.

Anxiety prevails in the city center and people are worried that the regime will move further north.
The biggest victims of this forced migration are children born into the war and who are trying to survive with their families.

The people of Idlib are saying they don't go out in the evenings due to intense regime shelling. But for them, staying at home is not safe either, the bombs can come anytime.

Hürriyet correspondents İdris Emen and Selçuk Şamiloğlu spoke with the residents of Idlib, the last opposition-held enclave in the war-ravaged country.

Muhammed Ahmed Ashour says a bomb fell in front of his house while having dinner at home with his family. He said he had barged out of the house with his children, not knowing what exactly to do.
"We were having tea with my family at home at around 10:00 p.m. and a bomb fell onto the house opposite us. Our windows shook and shattered due to the bomb. Our house has become uninhabitable. Our children live in fear. But we don't know where to go. This is our home," Ashour explained the fear he had experienced.

Shopping has also come to a halt in Idlib, where people would shop as usual and which was relatively safer than other parts of Syria in the past.

An Idlib shopkeeper says that people do not shop except for their...

Turkey should not be left alone on refugee issue: UNHCR representative

At least 11 arrested in Istanbul over migrant smuggling