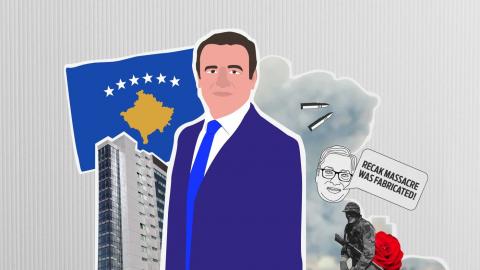 But not all "nationalisms" in the Western Balkans are the same. Many of them, at least initially, were a reaction to Serbia's aggressions and to the four wars it led under Slobodan Milosevic.

In his first address to the Kosovo parliament as Prime Minister, Kurti justly said that his government was "ready to sue Serbia over the genocide and war crimes committed during the Kosovo war". He also promised "full reciprocity in dealings with Serbia" and announced he was ready to "lead the dialogue."

Now he leads the government, President Hashim Thaci may finally be restricted to his constitutional duties, which are mainly ceremonial. Thaci has long been seen as the Alpha and Omega of Kosovo politics, especially when it comes to the EU-led dialogue with Serbia. Hopefully, for Kosovo's sake, that's about to change.

With the new government, Kosovo has a chance to escape the rule of those who have built up public support on deadly policies and legacies from the 1990s, as is the case with many of its neighbours.

Kurti is rare among the prominent public figures of the Balkans, being someone who suffered during a war, as opposed to being a suspected war criminal or perpetrator, supporter of war, or a random thief.

On the other hand, the new Prime Minister should not make promises that he cannot keep. His new government has a moral obligation to do exactly what it has pledged. If not, Kurti will become another Kosovo leader that spits in the faces of countless lives, just to score political points, as President Thaci has done. Take Serbia to court for genocide and war crimes against your people, Mr Prime Minister! The process is long overdue.