Museum of Innocence: Hub for lovers in heart of Istanbul 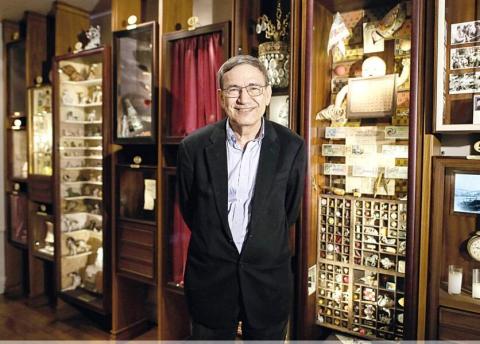 A flowery dress, a single earring, black and white photos, and thousands of cigarette stubs... Inside Istanbul's Museum of Innocence, visitors explore memories of lost love, couples find the privacy to show their affection, and the heartbroken seek understanding for their loss.
"Love is not only a happy meeting, or an encounter. There is also a dark side to love," Orhan Pamuk, Turkey's first Nobel-winning author, told the Anadolu Agency.
The pocket-sized Museum of Innocence in Pamuk's native Istanbul is modeled around a heart-wrenching 2008 novel penned by him of the same name.
Since he first got the idea in the 1990s, he began collecting objects to put on display in an actual museum.
"The desire to sacrifice oneself, the tendency to see your own feelings as the most important thing in the world, the desire for approval and the feelings of inferiority and superiority stand right on the sidelines," he added.
"Or, most commonly, the legitimization of much humiliation by pouring love over it," he explained.
"The upper classes, the bosses, the wealthy even make themselves accepted through love. That's why we admire the hero who values love over money," said Pamuk, 67.
Opening four years after the book's release, the Museum of Innocence took up residence in Istanbul's storied Beyoğlu district in a five-floor red 19th-century home.
In 2014 the museum won the European Museum of the Year Award, and it features exhibits on four of its floors in glass-fronted cabinets, which Pamuk once said were inspired by the works of avant-garde U.S. artist and filmmaker Joseph Cornell (1903-1972).
Pamuk personally designed each of the museum's 83 cabinets as "paintings" referencing different parts of the book.
Each is like a smaller museum in...