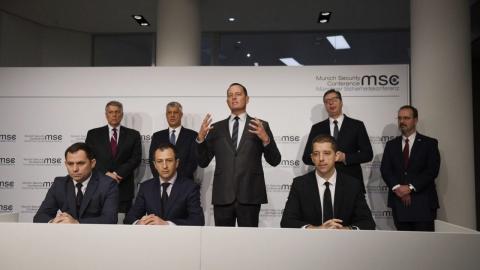 The leaders of Serbia and Kosovo on Friday welcomed an agreement to resume rail services between the two countries as an important step toward calmer relations between the two estranged nations. It follows an earlier breakthrough on resuming air links.

Kosovo President Hahim Thaci hailed the agreement signed in Munich as "another milestone" in a tweet posted after the ceremony, calling it a "great step" toward reaching a final deal on normalising relations between Serbia and its former province - whose independence it does not recognise.

"Today's agreement on railways is the best message for the region to have more peace and stability," Thaci said, thanking US President Donald Trump's special envoy, Richard Grenell, "for the excellent work he has done to reach this agreement" and "the leadership of the Trump administration."

Serbian President Aleksandar Vucic said nothing about Kosovo in his message, but likewise welcomed the agreement as "important for the freedom of movement of people, goods, capital, and service," adding that he was "pleased to see advance, and thank Trump and Grenell in the name of Serbia".

"We feel that this will bring us a better future and that we will ensure peace for decades to come," the Serbian leader wrote on Twitter.

The agreement was signed by a Kosovo delegation from the Ministry of Infrastructure and Transport, and by Marko Djuric, head of Serbia's Office for Kosovo, on the sidelines of the Munich Security Conference. Thaci and Vucic also attended, alongside the US ambassador to Pristina, Philip Kosnett.

Grenell thanked the two presidents, emphasising that it would be "best to concentrate on economic development and new jobs as much as possible".

The agreement comes after Pristina and...