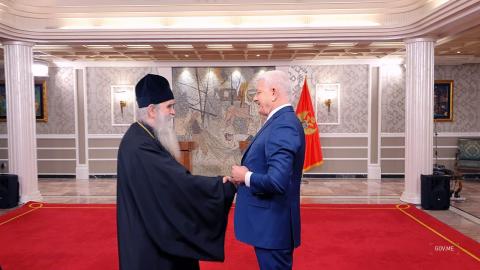 In the first such meeting since the country's parliament adopted a new law on religion in December, Metropolitan Amfilohije, the Serbian Orthodox Church's top bishop in Montenegro, has met the Prime Minister, Dusko Markovic, and submitted a list of proposed changes.

It was the first time the Montenegrin government had met representatives of the biggest faith group in the country since street protests against the new law began in December.

The Serbian Church, SPC, urged the government to retract that part of the law which calls for a directorate to compile a register of all religious sites in Montenegro.

Under the new law, any faith groups unable to provide evidence of ownership risk losing these sites. The Church - whose relations with the government are poor - claims this could allow the state to rob it of its property.

"The government has taken note of this initiative, assessing that a comprehensive review of the law and other possibilities offered by the legal system is required to answer this question. The talks will continue at expert level," both sides said in a conciliatory joint press release issued after the meeting.

The government says that through dialogue and building mutual trust, as well as by providing additional and appropriate guarantees, the law can be applied and is in line with the constitution and European standards. The Church disagrees.

"The Church maintains that it is necessary to speak about amendments to the Law, not about its implementation, because in the Church's view, the Law is not in accordance with the constitution or international standards," the joint statement noted.

However, President Milo Djukanovic sounded less conciliatory when he accused the Serbian Orthodox Church of putting...