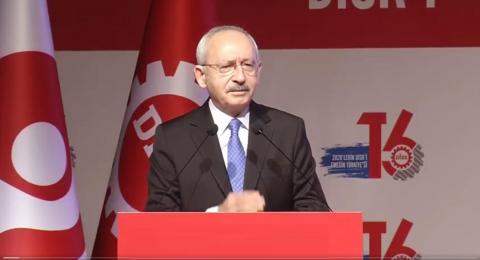 Turkey needs a genuine and strong democracy with rule of law and academic and media freedoms the same way the contemporary world enjoys, the leader of the main opposition has said, citing unemployment as the country's gravest problem that needs to be resolved.

Kemal Kılıçdaroğlu, chairman of the Republican People's Party (CHP), outlined his recipe to resolve Turkey's economic and social problems under four main titles in an address to the Confederation of Progressive Trade Unions (DİSK) on Feb 14.

"First, we need a genuine democracy. We should altogether reject the third-class democracy. We deserve the highest democratic standards applied in the contemporary world," Kılıçdaroğlu stated. These standards include judicial independence and impartiality, academic freedom, gender equality, separation of powers and freedom of expression among other things, he said.

In today's world, autocratic leaders are getting much more powerful, Kılıçdaroğlu said, "That's why we should say, 'All the democrats of the world should unite'."

The second important objective concerning economy is production, Kılıçdaroğlu said, criticizing the Justice and Development Party (AKP) governments for boosting the import of agricultural and industrial products over the years.

"The only way to economic independence, along with political independence, is to boost production," he said, stressing this would be the best way to address the growing unemployment problem in Turkey.

"Unemployment is the gravest problem of Turkey. It is the source of many social problems," he said, calling on the trade unions to put pressure on the government for the implementation of a family insurance system.

"I don't understand why the trade unions are not demanding this...