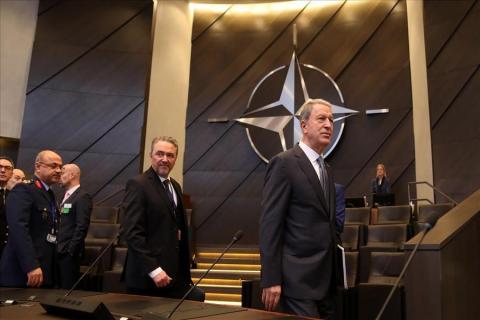 Turkey's Defense Minister Hulusi Akar had separate meetings with his British and French counterparts in Brussels on Feb. 13.

He met with U.K. Defense Secretary Ben Wallace before attending a session on defense, deterrence and burden-sharing.

During the bilateral meetings, the officials exchanged views on cooperation in military, security and defense industry.
They also discussed regional developments, particularly in Libya and Syria, the latest situation in Idlib, a de-escalation zone in northwestern Syria, and necessary moves to end the humanitarian crisis in the region.

During the talks, Akar underlined that civilians in Idlib, who flee their hometown due to violence, have been heading towards Turkish border, not to the regions under the regime control.

At least five Turkish troops were killed and five injured in an attack by Assad regime forces in Idlib earlier this week.

That followed last week's attack by regime forces in Idlib which killed seven Turkish soldiers and one civilian contractor working with the Turkish military. It also injured more than a dozen people.

Turkish troops are in Idlib as part of an anti-terror and peace mission.

Idlib has been a stronghold of the opposition and anti-government armed groups since the outbreak of the Syrian civil war in 2011.