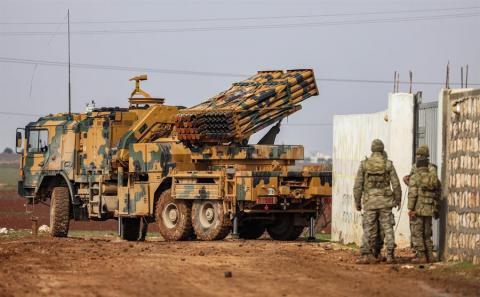 The meeting on the sidelines of the security conference comes amid efforts between Ankara and Moscow to calm the tension in the rebel stronghold down. Intensified attacks on the province prompted Turkey's anger following the killings of 14 Turkish military personnel in Syria.

A Turkish delegation is also expected to hold talks in Moscow early next week as part of the talks launched in Ankara between Turkish and Russian delegations to discuss the escalating conflict in Syria's Idlib region. Having two rounds of negotiations held in Ankara last week, parties were not able to reach a consensus after exchanging proposals regarding the advance of regime forces, control of M4-M5 highways and the Turkish observation posts in the province.

President Recep Tayyip Erdoğan vowed to respond to regime forces if they do not retreat to lines designated in the Sochi deal by the end of February, which was the position of regime security forces at the time the agreement was reached.

Turkey retaliated against Syrian forces after the killing of its soldiers in two separate incidents in one week of time.

The second incident came as a Russian delegation held the second round of talks in the Turkish capital of Ankara on Feb. 10. The fighting led to the collapse of a cease-fire brokered by Turkey and Russia in 2018. Turkey supports the Syrian opposition, while Russia heavily backs the Syrian regime's campaign to retake the area, which is the last rebel-held province.

The fighting has led Turkey to send hundreds of military vehicles and troops into...