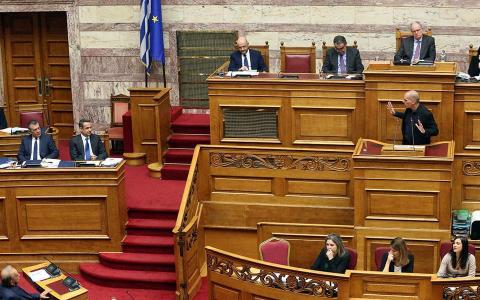 The head of Mera25 party and former finance minister Yanis Varoufakis on Friday submitted to Parliament an envelope allegedly containing his secret audio recordings from the Eurogroup meetings while he was negotiating for Greece's SYRIZA-led government in the first half of 2015.
Varoufakis said he expected House speaker Kostas Tasoulas to forward the content to Greek lawmakers.
Tasoulas, however, said he had no intention of sharing the recordings.
"Parliament will not shoulder [Varoufakis'] responsibilities," he said.
The exchange took place during a debate on labor issues.
Tasoulas' reaction was welcomed by Prime Minister Kyriakos Mitsotakis.
In a statement, Mera25 said that Tasoulas' refusal to accept the transcripts "confirms that Eurogroup's wall of intransparency suited and still suits many people, while truth and transparency terrifies [them]."...