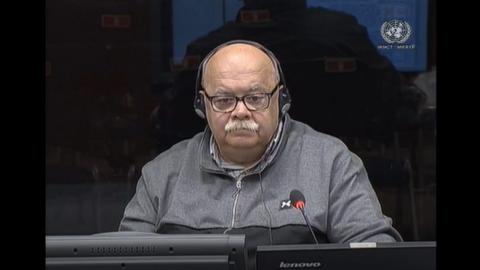 Jovan Dimitrijevic, who was in charge of logistics for Arkan's paramilitary unit, told the retrial of Jovica Stanisic and Franko Simatovic at the Mechanism for International Criminal Tribunals in The Hague that weapons for the unit's wartime activities were supplied by the Yugoslav People's Army, not the Serbian State Security Service.

He testified that money for Arkan's fighters came from donations from Serbian companies and rich individuals rather than from Serbian State Security. He also insisted that Arkan never met anyone from the security service.

Dimitrijevic was testifying from Tuesday to Friday as a defence witness at the retrial to Jovica Stanisic and Franko Simatovic, Frenki, former senior officials at the Serbian State Security Service, the SDB.

They are charged with participating in a joint criminal enterprise led by Serbian President Slobodan Milosevic to oust Croats and Bosniaks from swathes of Croatia and Bosnia during the wars there to create an ethnically-pure Serb state.

The indictment accuses them of organising the formation of special state security units and other forces to fight in Croatia and Bosnia between 1991 and 1995. According to the indictment one of those units was the Serbian Volunteer Guard, led by Zeljko Raznatovic and known as Arkan's Tigers.

Dimitrijevic said that the person in charge of the Yugoslav People's Army supply of weapons to the Serbian Volunteer Guard was general Tomislav Simovic, who was Serbia's defence minister from July to December 1991.

The prosecutor pointed out that Simovic left the ministerial post in December 1991, but Dimitrijevic argued that did not make a difference.

"I do not know when he stopped being the minister but as long as he was the minister, he helped us....