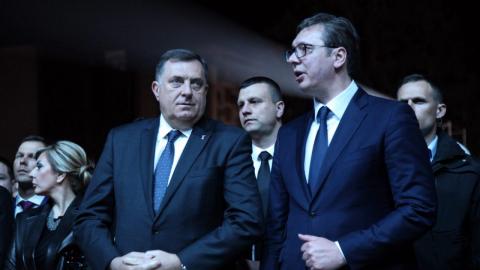 Bosnian Serb leader Milorad Dodik has repeated demands for a referendum on the status of the Serb-led entity in Bosnia, Republika Srpska, after meeting Serbian President Aleksandar Vucic in Belgrade.

Vucic said after the meeting that he had invited Dodik, Republika Srpska President Zeljka Cvijanovic and representatives of the Serbs in Montenegro to a further meeting on the situation facing Serbs in both Bosnia and Montenegro. Vucic also said he had told Dodik, "that whatever they plan to do, do it legally and democratically, through institutions, without any widespread destabilisation of the entire region".

Dodik, however, said that while he had no wish to destabilise the region, the Bosnian Serbs had a right to decide their own future.

"Finally, the people will decide. We will ask that the status of the RS be decided through a referendum. I have heard President Vucic present arguments for keeping the peace. That is all right.  But a time comes when people cannot allow us to be stupid. We support Serbia and its policies but we conduct our own authentic policies," Dodik told the same press conference.

Tensions have flared anew in Bosnia since the Constitutional Court outlawed a law passed in the Republika Srpska on farmland that used to belong to the Yugoslav state, which had declared it property of the RS. The court ruled that the state of Bosnia and Herzegovina, not the RS, was the owner of such land.