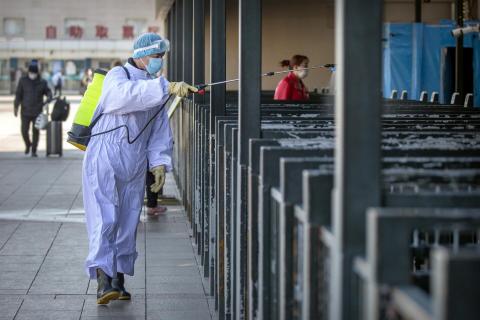 More than 2,600 new cases were confirmed from a coronavirus outbreak in mainland China, health officials said on Feb. 15, a day after people returning to the capital from holidays were ordered to quarantine themselves for 14 days.

The total of confirmed infections across mainland China was now 66,492 after 2,641 new cases were confirmed, as of Feb. 14, the National Health Commission said.

The death toll rose by 143 to 1,523, it said, with most of the new deaths in central Hubei province and in particular the provincial capital of Wuhan, a city of 11 million people where the outbreak began in December.

National Health Commission official Liang Wannian told a news conference the government would maintain efforts to contain the spread of virus in Wuhan, which has been under virtual lockdown for three weeks.

The commission was focused on lowering the fatality rate and reducing the rate of infection, Liang said.

China is struggling to get the world's second-largest economy going after the Lunar New Year holiday, which was extended by 10 days to help contain the virus.

Many travel restrictions are still in place and many factories have yet to reopen. Liu Xiaoming, vice minister of transport, said travel volumes were only about one-fifth to one-sixth the normal level.

China would maintain a prudent monetary policy and help companies resume production, the vice governor of the central bank told a news conference, while lenders would tolerate higher levels of bad loans to support firms.

Week in Review: Response and Responsibility