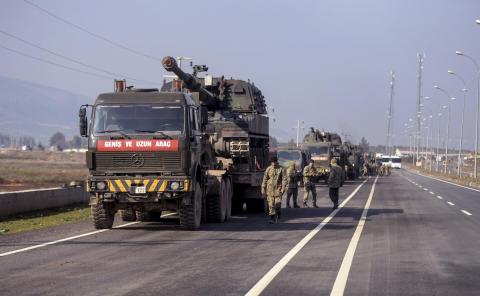 A Turkish delegation will visit Russia on Feb. 17 to discuss the situation in Idlib in northwestern Syria, according to Turkey's top diplomat, after a recent spike in violence in the region.

"The Turkish delegation on [Feb. 17] will attend talks in Moscow [on Idlib]," Mevlüt Çavuşoğlu

"Mr. President [Recep Tayyip Erdoğan] have already expressed our determination. We wish to accomplish this via diplomacy in the meetings we have held and will hold with Russia," Çavuşoğlu said.

The minister's remarks came while talking to reporters after a meeting with his German counterpart Heiko Maas on the sidelines of the Munich Security Conference. Çavuşoğlu said he discussed the situation in Idlib with Maas.

He asserted that the Syrian regime recently intensified its aggression because it believed in a military solution to the conflict rather than a political one.

"We want to see visible support from Germany and the other European countries and the European Union, as we saw from the U.K. and the U.S.," he added.

"If we can't stop this, there will be a great humanitarian tragedy," the top diplomat underlined.

Çavuşoğlu said briquette dwellings built on the Turkish border for Syrians fleeing Idlib with the help of Germany were only a temporary solution.

Turkey wants to solve issues with Russia over Idlib through diplomacy but will take other steps if necessary, the top diplomat added.

"The regime does not only target innocent people, but also our soldiers in our observation posts at the field," he said.

"It is not possible for us to tolerate this," the minister underlined.

For his part, Maas urged Russia to use its influence on the Assad regime to "stop attacks in Idlib." <...