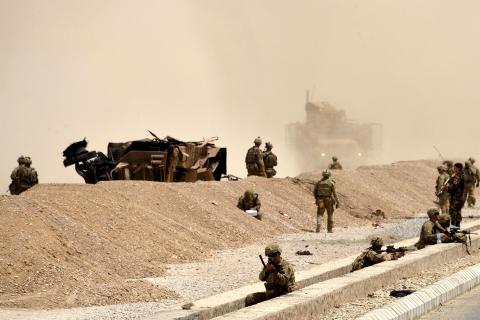 The United States and the Taliban have agreed to a temporary truce that, if successful, would open the way for a deal that would bring American troops home from Afghanistan and end 18 years of war.

The peace deal would call for negotiations between Afghans on both sides of the conflict to start next month, an eventual countrywide cease-fire and a commitment from the Taliban not to harbor terrorist groups like al Qaeda, while setting a timetable for the withdrawal of U.S. troops.

Details were provided separately on Feb. 14 by a senior U.S. official and a Taliban official, who was not authorized to publicly discuss the matter and spoke on the condition of anonymity.

The U.S. official said the agreement for a seven-day "reduction in violence" is "very specific" and covers the entire country, including Afghan government forces. There were indications a formal announcement could come as early as the weekend.

The official said the Taliban had committed to a halt in roadside and suicide bombings as well as rocket attacks. If the Taliban uphold their commitments, a U.S.-Taliban peace agreement would be signed within 10 days.

The Taliban official said the signing had been tentatively set for Feb. 29, with the start of the Afghan talks planned for March 10. The official said Germany and Norway have offered to host the talks but there has been no decision the venue.

That Taliban official said the agreement would provide for the release of 5,000 Taliban prisoners before the start of the...