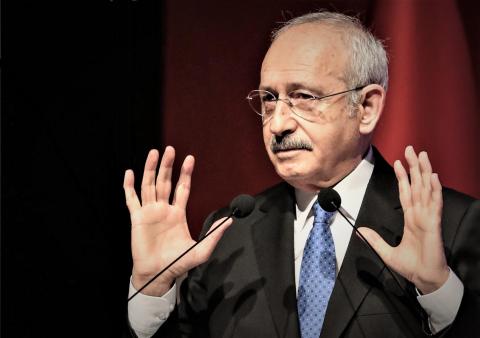 Turkey's main opposition leader has vowed to bring peace and stability to the Middle East by establishing a regional organization with the participation of Turkey, Iran, Iraq and Syria and to end years-long armed conflict in the area.
"We will establish the Organization for Peace and Cooperation in the Middle East," Kemal Kılıçdaroğlu, leader of the Republican People's Party (CHP) told at a party meeting in Ankara on Feb 16.
"Turkey, Iran, Iraq and Syria will come together under this organization. It will say 'We don't want proxy wars in our region. We will resolve our problems together."
CHP leader strongly criticized the Justice and Development Party (AKP) government for ruining Turkey's ties with the neighboring countries and allowing room
for the major powers to expand their influences in the Middle East.
"This organization will manifest by saying 'We don't want to be the tool of the major powers.' We will build the peace through rational policies," he said.
The AKP's policies have caused a very big economic, social and security burden on Turkey, which now has to take care of 3.6 million Syrians, Kılıçdaroğlu stated, adding that Turkey is now in a tight corner in Idlib province of Syria.
"They are looking around, but they cannot find a way out," he suggested. "We have always asked what Turkey is doing in the Middle Eastern swamp. We have 122 martyrs in Syria. For what reason?" he asked.
One of the reasons of the troubled foreign policy concerning the Middle East is because President Recep Tayyip Erdoğan cannot hold his tongue when talking about current issues, according to Kılıçdaroğlu.
"The foreign policy being conducted now is a product of a bunch of men at the presidency. They have totally sidelined the Foreign...