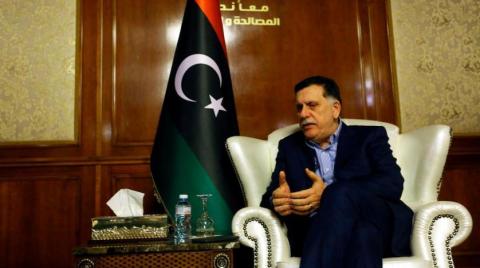 Libyan Prime Minister Fayez al-Sarraj reiterated on Feb. 15 that the Libyan problem could be solved through negotiations.

The crisis could be solved politically rather than military but as long as renegade commander Khalifa Haftar continues to target civilian settlements, negotiations could not continue, Sarraj told reporters in Tripoli.
And he characterized as "war crimes" the warlord's recent attacks targeting civilians.

Meanwhile, forces loyal to Libya's renegade commander Khalifa Haftar have killed three civilians east of the capital Tripoli, according to the country's UN-recognized Government of National Accord (GNA).

Three workers, including two Libyan nationals and one foreigner, were abducted and later killed in the town of Msallata, east of Tripoli, on Feb. 14, said the Facebook page of the GNA-led Burkan Al-Ghadab (Volcano of Rage) Operation.

Warring parties announced a cease-fire Jan. 12 in response to a joint call by Turkey and Russia. However, talks for a permanent cease-fire ended without an agreement after Haftar left Moscow on Jan. 14 without signing a deal.