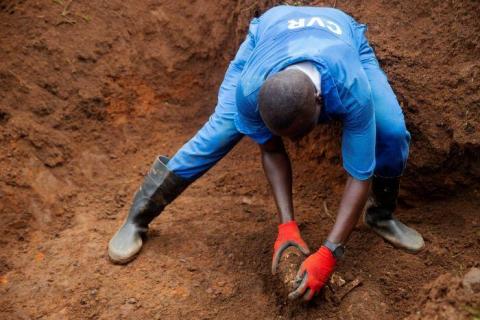 More than 6,000 bodies in six mass graves were discovered in Burundi, authorities said on Feb. 15.

It is the largest discovery since excavations were launched last month to find victims of ethnic violence.

"During the first phase of the excavation work near the Ruvubu bridge, in Karusi province, remains of 6,032 victims were exhumed. These victims were mostly of the same ethnic group and others perished as a result of interpersonal conflicts or settlements," local media quoted Truth and Reconciliation Commission Chairman Pierre Claver Ndayicariye,.

He said the remains were kept in body bags and placed in a secure location in the capital of Gitega province, pending a befitting reburial.

Thousands of bullets, clothes, glasses and rosaries which were used to identify victims, were also retrieved.

The remains are mostly victims of a 1972 massacre which reportedly targeted the Hutu ethnic group, according to Ndayicariye.

The Truth and Reconciliation Commission was established in 2014 to investigate atrocities committed from 1885 to 2008, when a stalled peace deal to end the civil war was fully implemented.

The commission has mapped more than 4,000 mass graves and identified more than 142,000 victims of violence.

Burundi's civil war fueled by ethnic tensions between the Hutu and Tutsi ethnic groups from 1993 killed an estimated 300,000 people before it ended in 2005.

Burundi will not change its stance on Kosovo

"Albanian will briefly be Macedonia's president"

"Brussels or Burundi? Burundi's nicer, they like us there"

Dacic responds to Pacolli: Serbia's only weapon is truth