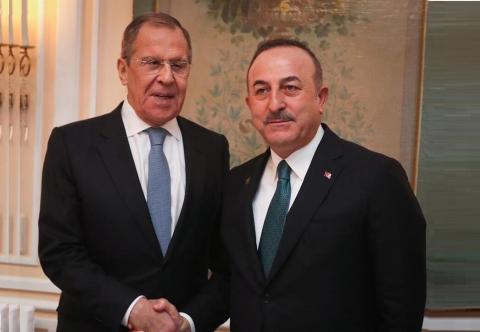 Turkish and Russian delegations are set to meet in Moscow on February 17 amid escalated tension in the Syrian province of Idlib where the Turkish and Syrian military forces pit against each other with concerns of fresh armed conflicts between the two.
The Moscow meeting was announced after Turkish and Russian foreign ministers, Mevlüt Çavuşoğlu and Sergei Lavrov held a face-to-face meeting in Munich on Feb 15 to discuss the recent standoff and ways to de-escalate in Idlib.
"Had a positive meeting with Foreign Minister Sergey Lavrov of Russian Federation. Our delegations will continue meeting in Moscow this Monday," said Çavuşoğlu on Twitter after the meeting. He also said he agreed with Lavrov on making an evaluation after the meetings in Moscow.
"Mr. President [Recep Tayyip Erdoğan] have already expressed our determination. We wish to accomplish this via diplomacy in the meetings we have held and will hold with Russia," Çavuşoğlu said after his meeting with German Foreign Minister Heiko Mass.
Lavrov, for his part, said Turkey and Russia have "very good relations" but that does not mean they have to agree on everything. "Full agreement on all issues cannot be possible between any two countries," he said at the Munich Security Conference.
Recalling the need to dissociate moderate opposition groups from terrorists, the Russian minister said "The task is difficult but contacts between Russia and Turkey at the expert level -- between diplomats, military, security services -- are aiming to find ways to implement the agreements on Idlib. The next round [of talks] will take place next week."
Turkey and Russia had provided a ceasefire agreement in Idlib between the Syrian regime and the opposition groups through September 2018 Sochi Agreement...