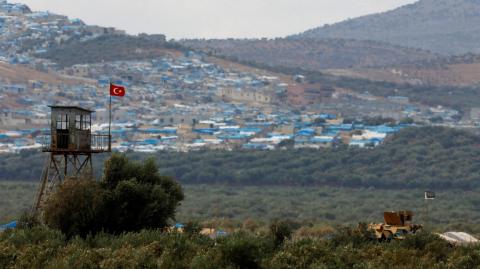 Turkey is determined to push back Syrian regime forces from Turkey's observation posts in Idlib, northwestern Syria, by the end of February, President Recep Tayyip Erdoğan said on Feb. 15.

"The problem in Idlib could not be resolved if the regime forces do not withdraw from areas determined in the Sochi agreement," Erdoğan said at an award distribution ceremony held at the provincial directorate of his ruling Justice and Development Party (AKP) in Istanbul.

"We would be glad if we could do this with the support of our friends," he added.

Underlining Turkey's resolute stance to clear Syria of terrorists, he said Turkey has tried to prevent the occupation and annexation of the Syrian territories.

It is impossible to prevent new migration waves to the Turkish borders and ensure the return of Syrian refugees from Turkey unless the Idlib issue is resolved, the president said.
Mideast
The U.S.' Middle East plan threatens the regional peace and tranquility, Erdoğan said.

"I would like to state once again that this so-called peace plan is nothing but a dream that threatens the regional peace and tranquility," Erdoğan told reporters upon his return to Turkey after his Pakistan visit.

Erdoğan stressed that Turkey will never allow "legitimization of invasion, annexation and destruction".

Noting that neither the West nor Europe or Africa accept the so-called peace plan, he said Turkey will get favorable result at the UN.

He also called on the Islamic countries and the Organization of Islamic Cooperation (OIC) to take clear stance against the plan.

On Jan. 28, U.S. President Donald Trump unveiled the controversial "Deal of the Century," to end one of the longest-running disputes in the...