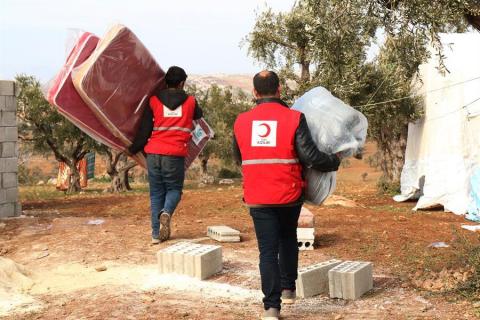 The Turkish Red Crescent on Feb. 16 distributed tents and heaters to Syrians fleeing clashes in and around Idlib, northwestern Syria.

The aid agency also distributed beds, blankets and food to people in the Mashhad Ruhin area, close to the Turkish border.

Hakan Sarı, head of the Turkish Red Crescent's border assistance operations, said that most people had to flee to the north due to clashes and heavy bombings in Idlib.

"We supply tents, particularly to families without tents, so they can pitch them under the olive trees," Sarı said.

The aid agency also distributed hygiene materials, as well as cookies and chocolate for children.

But more than 1,800 civilians have been killed in attacks by regime and Russian forces since then, flouting both the 2018 cease-fire and a new one that started on Jan. 12.

More than 1.7 million Syrians have moved near the Turkish border due to intense attacks over the past year.

Turkey remains the country with the most refugees in the world, hosting more than 3.7 million migrants since the start of the Syrian civil war in 2011.