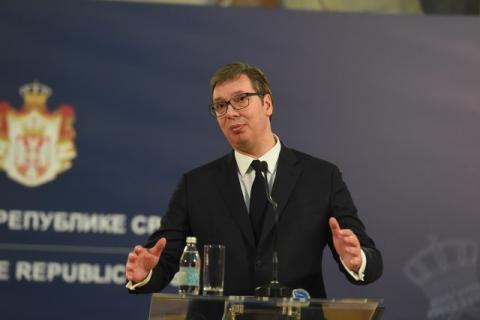 On 16 February, representatives from six Western Balkans countries joined Presidents Michel and von der Leyen, Croatian Prime Minister Plenkovic and High Representative Borrell for a first informal meeting in Brussels to prepare the EU-Western Balkans Summit to be held in Zagreb in May 2020.
At the beginning of the dinner, President Michel stressed that it was an opportunity to reconfirm the European perspective for the Western Balkans partners.
Serbian President Aleksandar Vucic will attend tonight's informal dinner hosted by EU Council President Charles Michel for Western Balkans leaders.
Vucic said in a statement to TV Pink ahead of the meeting that not only the President of the EU Council, but also the President of the European Commission, the head of European diplomacy, "everyone that matters in Europe" will attend this informal meeting.
He stressed that it would not be easy for him or for other Balkan participants.
"Everyone will bring up their own issues. Imagine what it would be like if I were not here. What a wonderful unison discussion would it be if it weren't for me. They will protect the interests of their territories and countries, and I will protect the territory of Serbia and the interests of Serbian people", he explained.