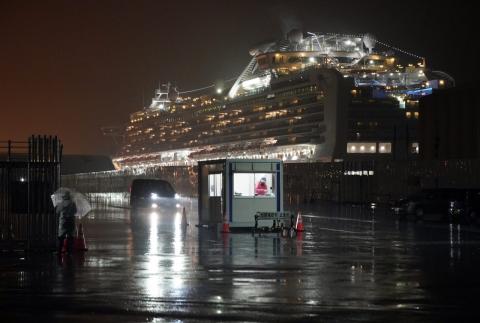 While the US, Canada and some other countries have started evacuating their citizens from the Diamond Princess cruise ship, docked at Yokohama in Japan, and quarantined amid the coronavirus COVID-19 epidemic, citizens from the Balkan region will remain stuck on board until the isolation period ends this week.

Some 17 Romanian citizens, 14 Serbian citizens, six Croatians, two Macedonians, one Bosnian and one citizen from Montenegro are on the ship that contains the largest cluster of COVID-19 cases outside China.

The ship has been held in quarantine since February 3 and the quarantine is not due to end until Wednesday, February 19.

Of the three citizens of North Macedonia on the ship, two are in good health and remain on board, North Macedonia's Foreign Ministry said last Thursday, confirming that one had tested positive for the virus and was taken to a Japanese hospital. His condition is being checked by North Macedonia's embassy in Tokyo.

Regarding evacuation plans, North Macedonia stated only that it is in daily contact with the two remaining citizens on board and that it will inform the public about any possible evacuation plan.

As reported on Thursday, one Romanian citizen tested positive for coronavirus and was also transferred to a Japanese hospital. The Romanian Foreign Ministry said its embassy in Japan was in contact with the other 15 Romanians crew members and two passengers.

Ivica Dacic, Serbia's Foreign Minister, said on Friday that four Serbian nationals were in isolation because of contact with an infected person, but their test results were not known yet. Serbia has not announced plans to evacuate its citizens.

The Bosnian Foreign Ministry said that the one Bosnian citizen on board ship was a member...