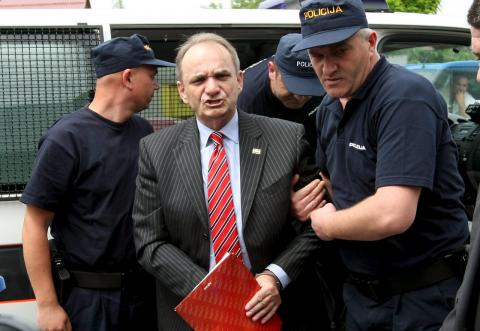 Two former politicians, Luka Bebic and Andrija Hebrang, members of the ruling Croatian Democratic Union, HDZ, told Zagreb County Court on Monday that they only learned from the media that the defendant, Branimir Glavas, had been involved in war crimes against Serbian civilians in the eastern city of Osijek in 1991.

Bebic, a prominent veteran member of the HDZ and former chair of parliament who served as Defence Minister during the independence war, said that during the war he often met Glavas, who linked all the components, "defence and civilian", but did not know about the killings in Osijek.

Hebrang, a former health minister and coordinator of the armed forces in the 1990s, said that he had been in Osijek at least twice a month at the time and had meetings with Glavas.

"He helped me a lot. Firstly, he was in civilian structures and later in the military, and we had problems in Osijek with the 'fifth column' [of Yugoslav intelligence]," Hebrang said.

He said he did not know directly about the killings of civilians and still considered Glavas one of the key defenders of Osijek.

Krunislav Olujic, who was the district attorney at the time, also testified and said he had heard about the killings of civilians, both Croatian and Serbian. According to him, various paramilitary units that were not part of the Croatian army were responsible. He also said that Glavas was not the head of those paramilitary units.

The "Garage" case centred on Cedomir Vuckovic, who was forced to drink car battery acid in a garage in Osijek in August 1991. When he fled the garage in pain, Krunoslav Fehir, a member of the 1st Battalion of Osijek...