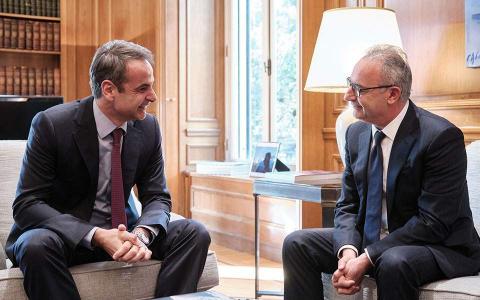 Amid tension in the Eastern Mediterranean fueled by Turkey's continuing provocations, Prime Minister Kyriakos Mitsotakis has assured the head of Cyprus' ruling Democratic Rally party Averof Neofytou that Greece stands by the ethnically-split island.
During their meeting at Maximos Mansion on Monday, Mitsotakis voiced Greece's solidarity with Cyprus over Turkey's provocations and violations of international law.
Both sides reiterated the call for a just and sustainable peace settlement along the principle of a bizonal, bicommunal federation.

The discovery of offshore resources in the Eastern Mediterranean has complicated negotiations over a peace deal. Cyprus was divided in 1974 after a Turkish invasion triggered by a brief, Greek-inspired coup.