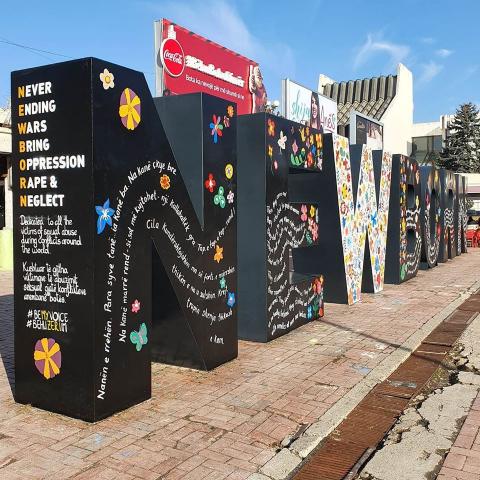 The so-called Newborn monument was unveiled 12 years ago in the middle of the capital, Prishtina, to mark the day when Kosovo declared its independence from Serbia. Each year, the obelisk is painted and the word Newborn, symbolizing the birth of the new state, is turned into a new acronym sending a message to the world.

This year, the word Newborn stands for "Never Ending Wars Bring Oppression Rape & Neglect" and is "dedicated to all the victims of sexual abuse during conflicts around the world".

Feride Rushiti, from the Kosovo Rehabilitation Center for the Victims of Torture, QKRMT, explained during the inauguration of the symbol that "these letters combine the narratives of survivors of sexual violence and through this illustration I want to thank Fisnik Ismaili (the primary designer of NEWBORN). We think that Kosovo society will stop being prejudiced and bypassing all those voices, cries and suffering that survived the war."

The new female speaker of the Kosovo parliament, Vjosa Osmani also participated in the inauguration and said that, "to fight stigma, it is necessary to honour the sufferig that the women and men of Kosovo have experienced."

NEWBORN statue, in Prishtina, Kosovo, on the 12th year of independence, with testimonies from victims of sexual abuse in conflicts around the world. Photo: Fisnik Ismaili.