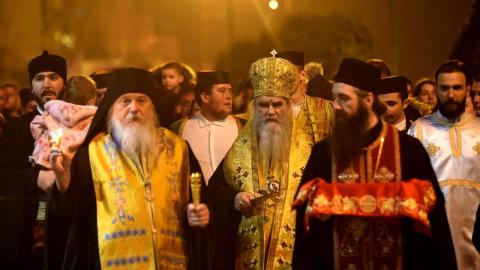 Mass protests of Serbian Orthodox Church clergy and their supporters continued across Montenegro at the weekend as the government and Church negotiate about the fate of the Freedom of Religion law adopted in December.

Metropolitan Amfilohije, the Church's top bishop in Montenegro, on Sunday called on the government to withdraw the law, claiming people would not have voted for the government if they had known it would pass such a law.

"If they are a people's government, they should hear the voice of the people," Amfilohije told a protest in the city of Niksic on Sunday.

The bishop announced that Serbian Church leader Patriarch Irinej will lead a prayer walk in the capital, Podgorica, on February 29 on the feast day of St Simeon the Peacekeeper, joined by the Metropolitan of Kyiv and all Ukraine, which would be a continuation of regular Church-led protests.

Media reports said 62,780 people joined Sunday's protests across the country, while Church claimed more than 100,000 did so.

However, President Milo Djukanovic on Monday again criticised the protests, saying they formed part of a fierce rivalry in the region between policies that represent a European future and those that want to keep the Balkans off the European track.

"As the government develops a civil state and a multi-ethnic society that will be an integral part of the EU, we have a proposal to return Montenegro to the status of a national, more precisely, Serbian state," he said in Brussels, "to the status of a state governed by the...