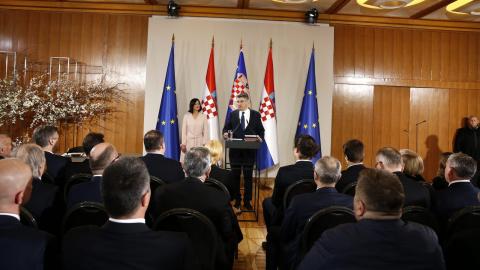 Centre-left former Prime Minister Zoran Milanovic was sworn in as president of Croatia on Tuesday, six weeks after he defeated incumbent conservative Kolinda Grabar-Kitarovic in a run-off election.

Sticking to his slogans during an election campaign once again characterised by arguments over the wars of Croatia's past, Milanovic, 53, told the ceremony that "the wars are over" and that, today, it is "our duty and responsibility to make sure that no citizen of our country feels intimidated, discriminated against."

He stressed the need to distinguish between patriotism and "raw nationalism".

"Patriotism, in contrast to raw nationalism, is a critical attachment and negation of exclusivity," Milanovic said in his speech. "Patriotism is a constant and persistent effort to affirm those aspects of statehood that have made our society and our lives better, more meaningful, and more inspirational."

After a rendition of the Croatian national anthem by 70-year-old Croatian music legend Josipa Lisac, Milanovic took the presidential oath of office in the front of the president of the Constitutional Court, Miroslav Separovic. Milanovic resigned as leader of the opposition Social Democrats before taking up his post.

For the first time, the ceremony took place at the official presidential residence in a forested area of the capital, Zagreb, formerly known as 'Tito's Villa' after the leader of socialist Yugoslavia for whom it was built in the 1960s. Previous inaugurations have been held on St Mark's Square in Zagreb's old town.

Milanovic opted for a low-key ceremony with only 43 guests, including his family and staff, representatives of parliament, the courts, Grabar-Kitarovic and two former presidents - Stjepan Mesic, who was president from 2000...