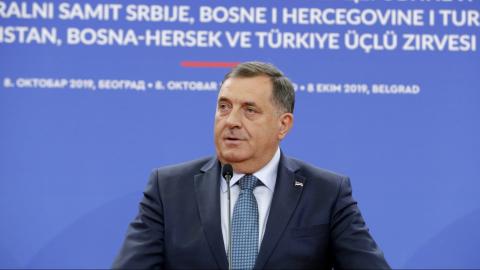 Pre-election fever was in the air of the Balkans too, as politicians in Bosnia, Croatia, Montenegro, North Macedonia and Serbia geared up for elections taking place over the year.

As tough and unpopular economic and social reforms hung Bosnia's politicians like a Sword of Damocles, they jealously watched Montenegro, Serbia and Kosovo stealing attention with their respective crises.

For Bosnian Serb leader Milorad Dodik, the Serbian member of Bosnia's state presidency, it was all too much.

Last week, he threw an epic tantrum, creating a crisis that would ensure him a comfortable election campaign, without having to bother about tough reforms and bread-and-butter issues.

Dodik tore into a recent ruling of Bosnia's Constitutional Court about the ownership of agricultural land in the country's mainly Serbian entity, Republika Srpska, and led all RS parties into a boycott of decision-making process in state institutions.

Dodik warned that Bosnian Serb politicians would only go back to work once a new law was adopted on the court that removed the presence of foreign judges, as well as a new election law acceptable to his Bosnian Croat ally, Dragan Covic.

This ultimatum left no real room for negotiations with either Bosniak leaders or international officials.

An old trick - distract the public before elections:

Dodik's tantrum followed a tested recipe in history - if living standards, and the economic and social situation are all worsening, find a good distraction.

Gladiatorial games are hard to organise these day, so, Dodik - like many other modern...