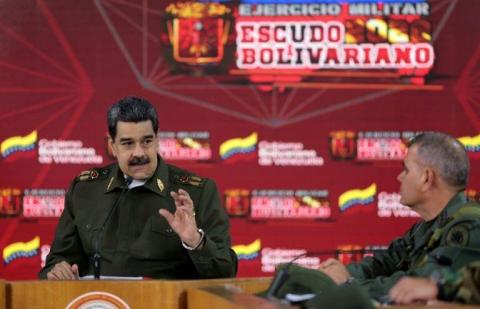 President Nicolas Maduro on Feb. 17 said he is "not afraid of military combat," accusing his US counterpart Donald Trump of plotting to invade Venezuela with the support of regional allies.

"We don't want war; we don't want violence; we don't want terrorism, but we are not afraid of military combat and we are going to guarantee peace," said Maduro in a televised speech, surrounded by the armed forces high command.

"Donald Trump was convinced that it is easy to get into Venezuela," said the socialist leader, accusing the US of having assembled a "mercenary force" to invade.

The US is one of more than 50 countries that have recognized opposition leader Juan Guaido as Venezuela's interim president after Maduro's 2018 re-election was widely denounced as rigged.

Maduro, however, still enjoys the support of Turkey, Russia, China and Cuba.

He also said there were groups of military "deserters" training in neighboring Colombia to "enter silently and attack military units."

Military exercises were carried out over the weekend, Maduro added, in response to alleged attack plans orchestrated by the US, Colombia and Brazil.

According to official figures, some 2.4 million soldiers and members of the civilian militia were deployed throughout the country.

The practices were carried out "based on real threats, not imagined ones," said defense minister General Vladimir Padrino, who was seated next to Maduro during the president's speech.

Trump vowed to "smash" Maduro's rule in his annual State of the Union address to Congress, which was also attended by Guaido, earlier this month.

Trump branded Maduro as a "tyrant" during his speech and called Guaido the "legitimate president...

Cuba gets first prime minister in over 40 years