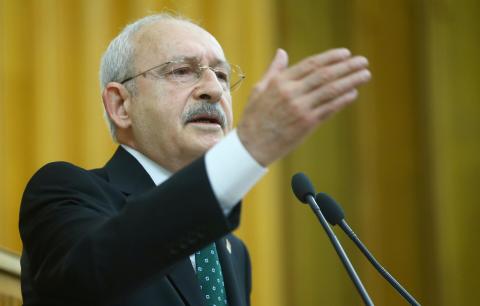 Main opposition Republican People's Party (CHP) leader Kemal Kılıçdaroğlu on Feb. 18 criticized the government over Turkey's economic troubles, saying the policies have led to the "impoverishment" of citizens and unemployment to rise.

"Let's talk about today's Turkey. Why are the citizens hungry? Why is there unemployment? Our population is almost the same with Germany. Germany is looking for workers, we have unemployment. Why is that so?" Kılıçdaroğlu said.

The CHP leader's remarks came during his party's parliamentary group meeting in the capital Ankara.

"There is unemployment, there are parents who are unable to bring food to their children," Kılıçdaroğlu said.

"Why are tens and thousands of people eating from dumpsters?" he questioned. Kılıçdaroğlu was referring to a recent video footage that emerged on social media, showing four people searching for food from inside a municipality's garbage container.

"You can see a lot of people right next to the dumpsters. Go to the farmers market in the evening. The poor will collect the wasted [produce] while the sellers are tidying up their stalls," he said.

"It is impossible for this reality not to hurt one's conscience."

"You need to put a break on this," he said, addressing the public.

Kılıçdaroğlu also said that the "presidential palace" has a different view of Turkey, when compared to what the public has been going through.

"They do not have a problem like unemployment. The palace's agenda does not include poverty. The socialite of the palace does not even know what poverty is," he said.

"They do not have concern for the...