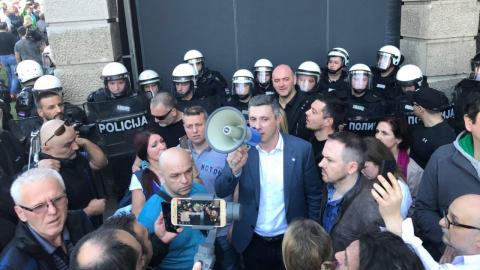 Serbian right-wing opposition party Dveri launched an anti-immigration campaign on Tuesday, warning that the country risked becoming "the biggest migrant centre in this part of Europe" despite statistics that show the vast majority of migrants who enter Serbia pass through quickly en route to Western Europe.

Dveri is part of an opposition alliance that has vowed to boycott a parliamentary election on April 26, arguing that the ruling Progressive Party of President Aleksandar Vucic has failed to ensure a level playing field.

Dveri tweeted that the party would start collecting signatures in the western city of Cacak in favour of changing "government policy on immigrants". A party truck bore a banner declaring, "Are these women and children migrants? Petition against government immigration policy. The signature that guarantees security for your children."

Dveri leader Bosko Obradovic suggested the campaign was part of the Alliance for Serbia election boycott.

"We're on!" he wrote on Twitter. "To every city and every village must come the idea of a boycott, a fight for free and fair elections and the liberation of Serbia from this criminal, traitorous and thieving authority. No way back! No going back and no surrender!"

A week ago, Obradovic warned in a tweet that Serbia risked becoming the "biggest migrant centre in this part of Europe."

"Migrants will not be able to go forward or back but they will be permanently settled here", he wrote.

Serbia's Commissariat for Refugees and Migration...