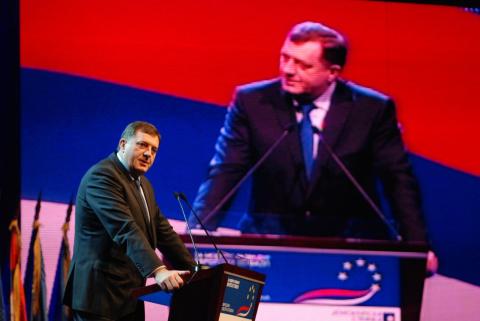 Bosnian Serbs threatened on Feb. 17 to secede in a bid to rid Bosnia's top court of foreign judges, risking another political crisis.
The parliament in Republika Srpska -- which shares some central institutions with the Muslim-Croat Federation -- gave a 60-day deadline for reform of Bosnia's Constitutional Court.
"Goodbye Bosnia, welcome RS-exit," said Milorad Dodik, the Serb member of Bosnia's joint presidency. "We will see each other in 60 days."
Three foreign judges serve on the court along with two Croats, two Muslims and two Serbs -- a legacy of the peace deal that ended the 1992-1995 war and divided Bosnia along ethnic lines.
The court decided earlier this month that unclaimed agricultural land was automatically the property of the central Bosnian state rather than Republika Srpska -- contradicting Bosnian Serb law.
"Serbs are frustrated over constant efforts aimed at destroying their identity," Republika Srpska President Zeljka Cvijanovic told the MPs.
The deputies backed a decision taken last week by their leaders that Serb representatives in Bosnia's central bodies would down tools and stop taking part in decision-making.
The foreign ambassadors warned in a statement that "unilateral withdrawal from institutions, or blockages of decision-making within them, are unacceptable".
"The red line was crossed," said Dodik of the court decision on the weekend.
Dodik, who has repeatedly voiced his ambition to organise a referendum on Republika Srpska independence in recent days, accused the West of contributing to efforts by Bosnian Muslims "to choke Republika Srpska".
He said he would be "even more convinced" after 60 days that Republika Srpska needed to secede.
Bosnia's 1992...